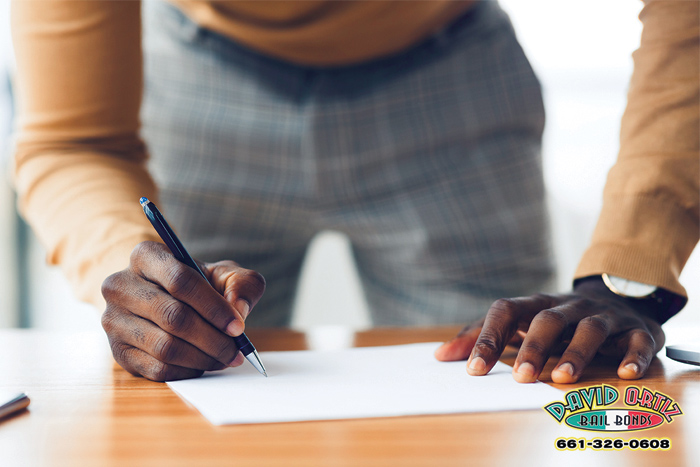 One of the great things about the American justice system is the bail bond process. The courts charge an amount of money that they feel will inspire you to make all of your court dates. Once your fate has been determined, you either get the bail money back or it’s used to help cover your court costs and legal fees.

The problem with the bail process is that amount of bail the judge chooses is often more than you can possibly hope to pay. That’s where David Ortiz Bail Bonds in Farmersville enters the picture. Provided you pay us 10% of your bail, we’ll cover the rest of the amount. When your case reaches its conclusion, we keep everything, including the 10% you paid us.

Whether you pay your bail yourself or we assist you, there are a few things you need to know before you sign your bail bond contract.

Bail works as insurance. If you don’t want to forfeit the money, you must make every single one of your court appearances. It doesn’t matter if you’re scheduled to work, if you get sick, if a family member is in the hospital. You have to appear. Missing a single court appearance means you forfeit your bond.

If you fail to show up and David Ortiz Bail Bonds in Farmersville covered the bail, we have no choice but to find you and bring you back to jail at which point you’ll be arrested. If you suspect you can’t make a court date, contact the court (and us) right away and start making arrangements. In some cases, the court might be willing to reschedule.

Missing A Court Date Can Cost You

If you do miss a court date, it’s going to cost you. We can charge you additional money if we have to send a recovery agent to find you. It can also mean that additional, failure-to-appear charges will be filed against you. In the long run, it’s easier and cheaper to make all of your court appearances.

If You Co-Sign, You’re Responsible For The Defendant

In many cases, the person who has the most to lose is the individual who co-signed for the defendant’s bail. By co-signing for a bail bond, you’ve entered into an agreement with David Ortiz Bail Bonds in Farmersville that you’ll do everything in your power to make sure the defendant shows up to court. If they fail to appear, it means you’ll lose any money or property you used as collateral.

It doesn’t matter if you’re handling your own bail or if you’re co-signing for a loved one, it’s vital that you read the contract carefully and pay close attention to all of your court dates.

If you or one of your loved ones finds themselves in need of bail, you can rest assured that David Ortiz Bail Bonds in Farmersville will handle the matter quickly and discreetly. Contact us at 1-866-485-6356 or 661-326-0608 or click Talk To An Agent Now to chat.